Three regulars at Longrun Meadow: Cathy, Paul and Dave G. Dave making a habit of sub 40; infact, well under this week.
Also in Taunton were Amanda and daughter Sam. Sam is now in the 11-14 category and no longer constrained by running with
an adult.

Sue, Grahame and Andrew ran over at Montacute. Favourable conditions were reported: "a comfortable temperature and no rain.
Also, the bright sunshine had burnt off most of the dew by the time the run began." All three achieved high percentages, Sue
topping our table.

News from Monty: "Unfortunately there have been complaints received by the National Trust about parking in the Village after the
gates have been closed – and there was some “interesting” parking between the rows of cars within the car park itself.
Can we please ask again that you try:
- To arrive nice and early; we can get more of you in if you all park nice and sensibly
- Car share where possible
- If you live in and around Montacute, try coming in by bike / on foot

If you do park in the Village, please do so as nicely as possible – the complaint came from the line of cars along the roadway leading
from the King’s Arms and restricting the roadway and entrance to the House itself. We want to keep the villagers on side!"

Richard tried the very taxing Woolacombe Dunes course for the first time. Woolacombe ranks as one of the hardest Parkruns in the
UK, running on sand and across the dunes is challenging.

Woolacombe reports that this week they had their first VM80-84 runner:
"Awesome run by Tom Harrison today who completed the course in 38:17. This was Tom’s 315th parkrun and 36th different event.
Tom was full of encouragement for other parkrunners and left us with this sage advice;
‘Exercise often, eat well, sleep well, be happy!’"

And touristing down at The Eden Project was Marie and her family for the first time. Marie reports: "PB at Eden Project Parkrun this
morning and Ed did his first complete one in 26:31 - I think Tony and I need to be upping our game or speedy will be beating us soon 🤣🤣"

And news of yet another local(ish) Parkrun up the M5 at Clevedon. The event is held at Clevedon Salthouse Fields and was its second
event on Saturday. Their report:

"Wow – aren’t we lucky to have such a great new parkrun starting in our area!  Round the small park, then out on to the prom past the
Marine Lake, and along the seafront, and then back and repeat all over again!  The Lake would have looked more appealing for a swim if
it hadn’t been quite so wet and windy, but it was still a beautiful course to run in spite of the weather conditions.

266 runners turned up in spite of the inclement weather – down a bit on the inaugural numbers last week but still very healthy given
the conditions. It was good to see 194 running at Clevedon for the first time this week, and even better that 38 of these were doing their
first ever parkrun.  We hope you all enjoyed it, and that you return soon.  Welcome to the parkrun family.  Indeed, there may have been
more on their first ever parkrun as 13 people had no barcodes.  Don’t forget to register and get a barcode if you don’t already have one,
and always remember to bring it with you!  At the other extreme of those doing their first ever parkrun, Mel Warren did his 351st parkrun!
45 clubs were represented, and it was good to see so many local clubs supporting their new parkrun.

On such a wet and windy day, first congratulations and thanks have to go to the amazing course team and volunteers who stood there getting
soggy and blown about without any complaint, but instead cheering us all on and encouraging us to keep going.  You were a great bunch and
made our visit very special.  Thank you so much to you all – parkrun would never happen without you all, and Clevedon is lucky to have such
a great team of volunteers.

Congratulations too to the 59 runners who came back for week 2 after completing the inaugural last week, and of those 40 achieved a new PB,
which is a great achievement especially when we had to battle the wind for what seemed a lot of the course!  Well done to you all.

Both the first male and the first female runners back set new course records.  James Denne finished in 16:29, and Gemma Collier in 19:06
– those will be tough records to beat in future weeks.  Great running by you both.  There were also some very high age gradings – particular
congratulations to Maggie Salter (82.87%) and Alfredo Becerril (80.11%).  But well run to us all whether we ran, jogged or walked – we were
all faster than if we had stayed in bed!

There were also several milestones reached today.  Juniors Oliver Andrews, Kyle Burford and Lily Hardy all reached their 10 milestones while
Samuel Harmer reached 50, so there will be some new white and red t shirts appearing soon.  Mark Ainsworth reached an unofficial milestone
of 300 parkruns.  Well done to you all.

Visiting with three friends, we enjoyed talking to several of the first-time-ever parkrunners as well as many of the other visitors.  One notable
visitor was Charlie Harding, who cycled out from Bristol, ran the course in 19:05, then scanned barcodes, before he set off to cycle back to Bristol
– shows real motivation! We also enjoyed token sorting at the end and meeting some of the course team.  For those new to parkrun, it is run
entirely by volunteers and if you can volunteer occasionally you will be enormously welcomed and appreciated – there are a number of roles that
you can do and still run, or you can give yourself a week off from running.

Another noteable mention is Vic and Skruff. Vic walked the whole route on crutches with her loyal companion Skruff strapped to her front. She
finished in an admirable 1hr 19 mins 20 seconds. Well done!

Clevedon Salthouse Fields will definitely become my second home parkrun, and a new favourite, and I look forward to returning regularly.
Thank you everyone for getting such a splendid parkrun up and running, for being such a great course team, and for being so welcoming
– and for letting me write the second run report!  I really enjoyed my morning."

(1) 'They are off' at Monty - spot Sue in her colourful Flanci skort: 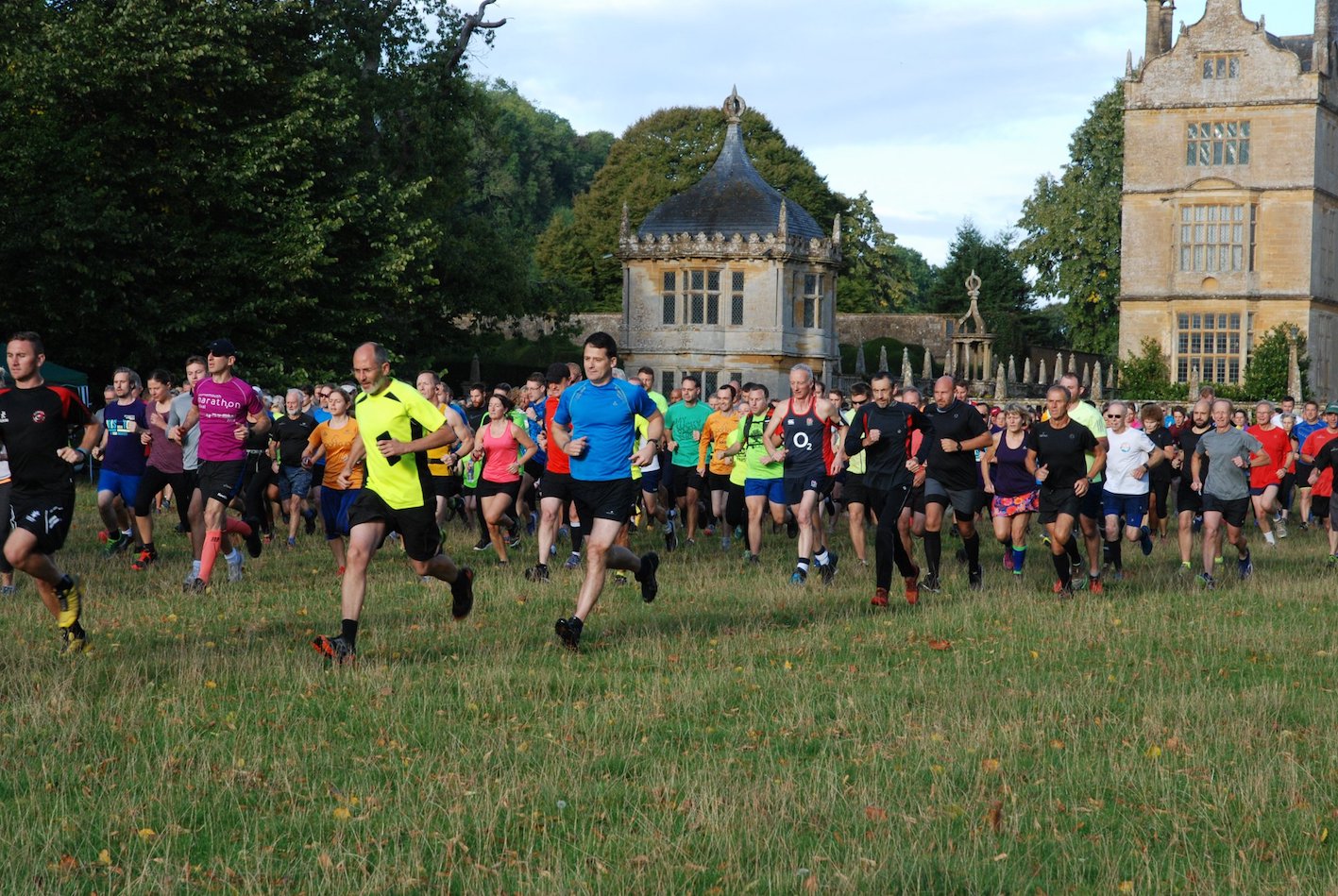 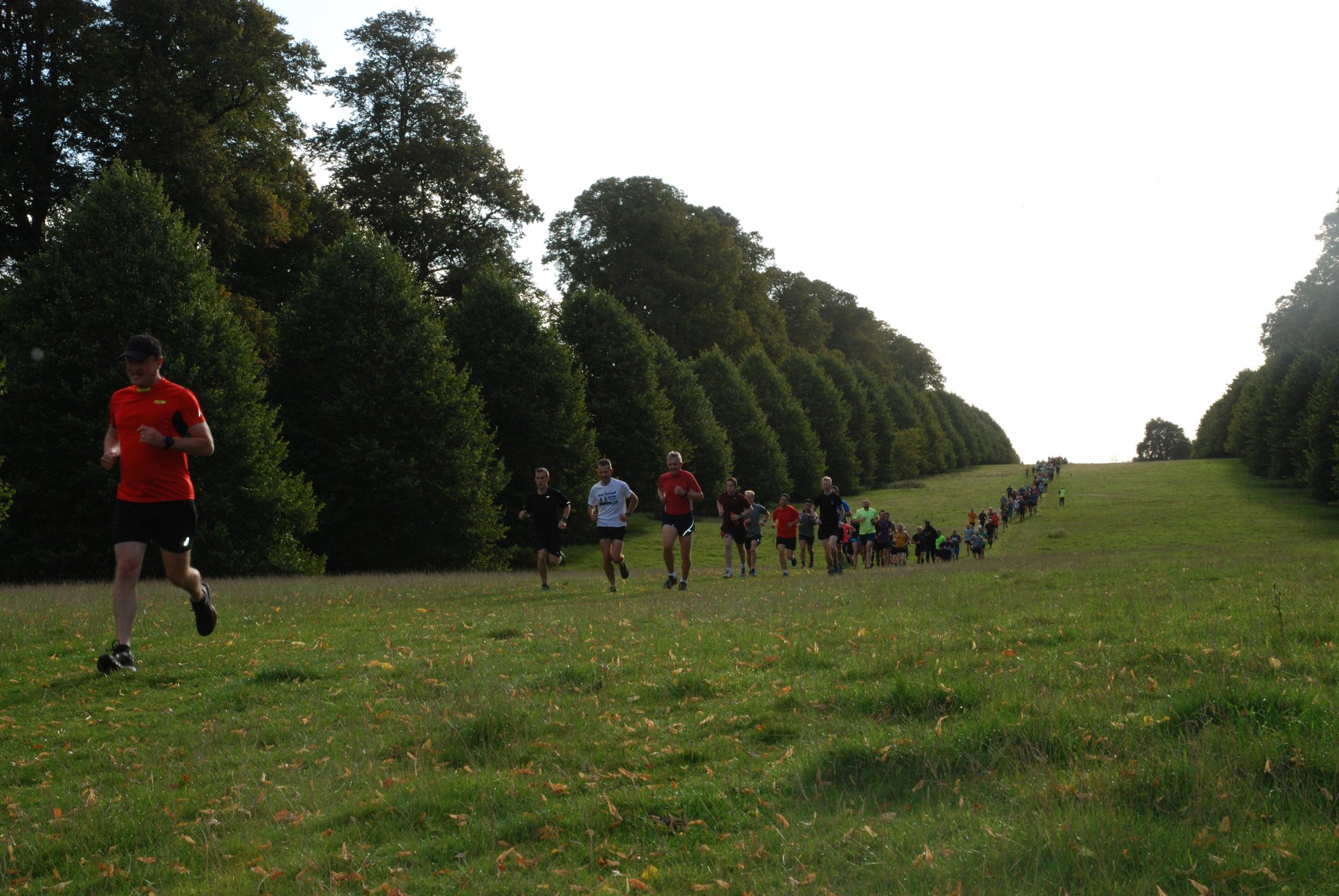 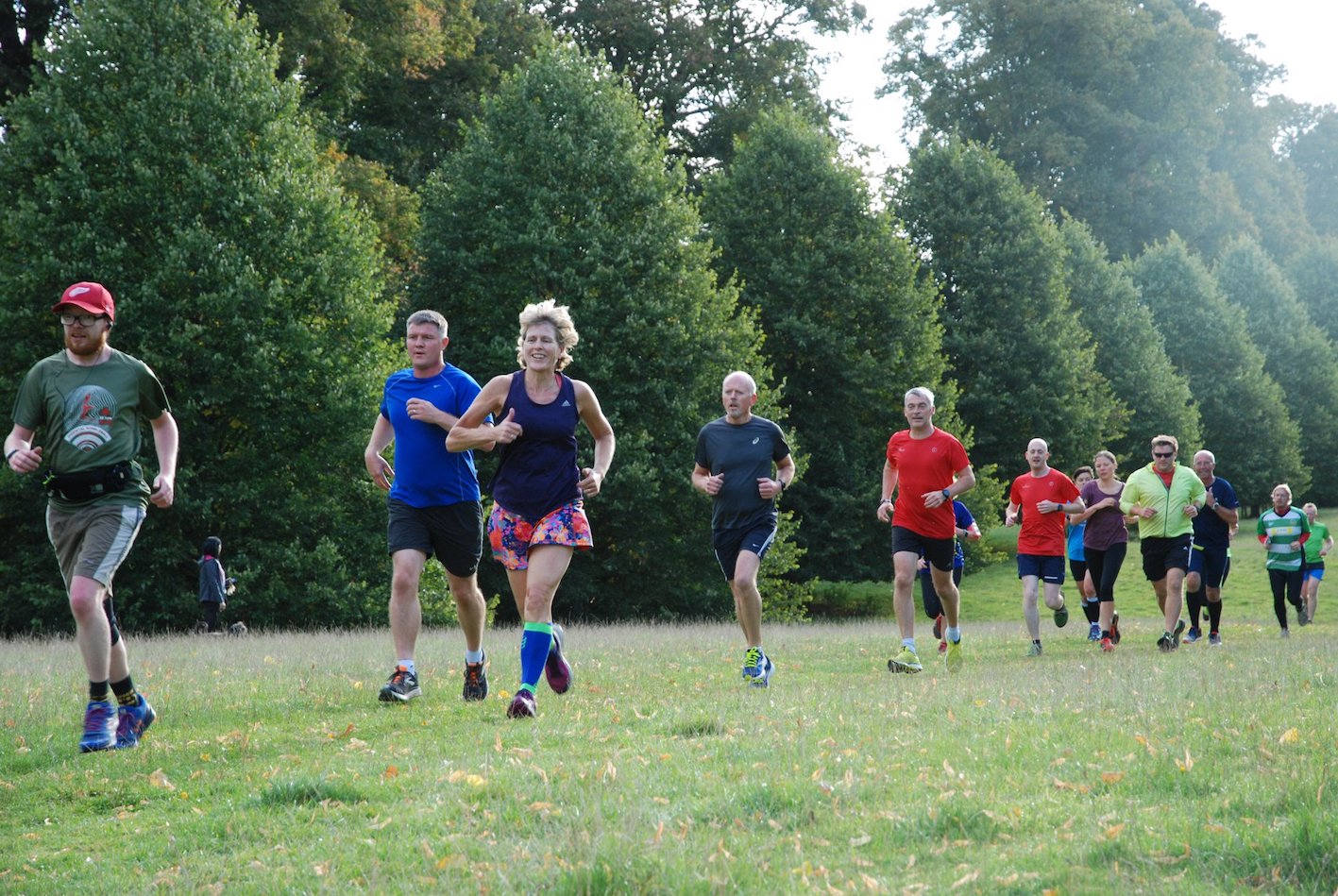 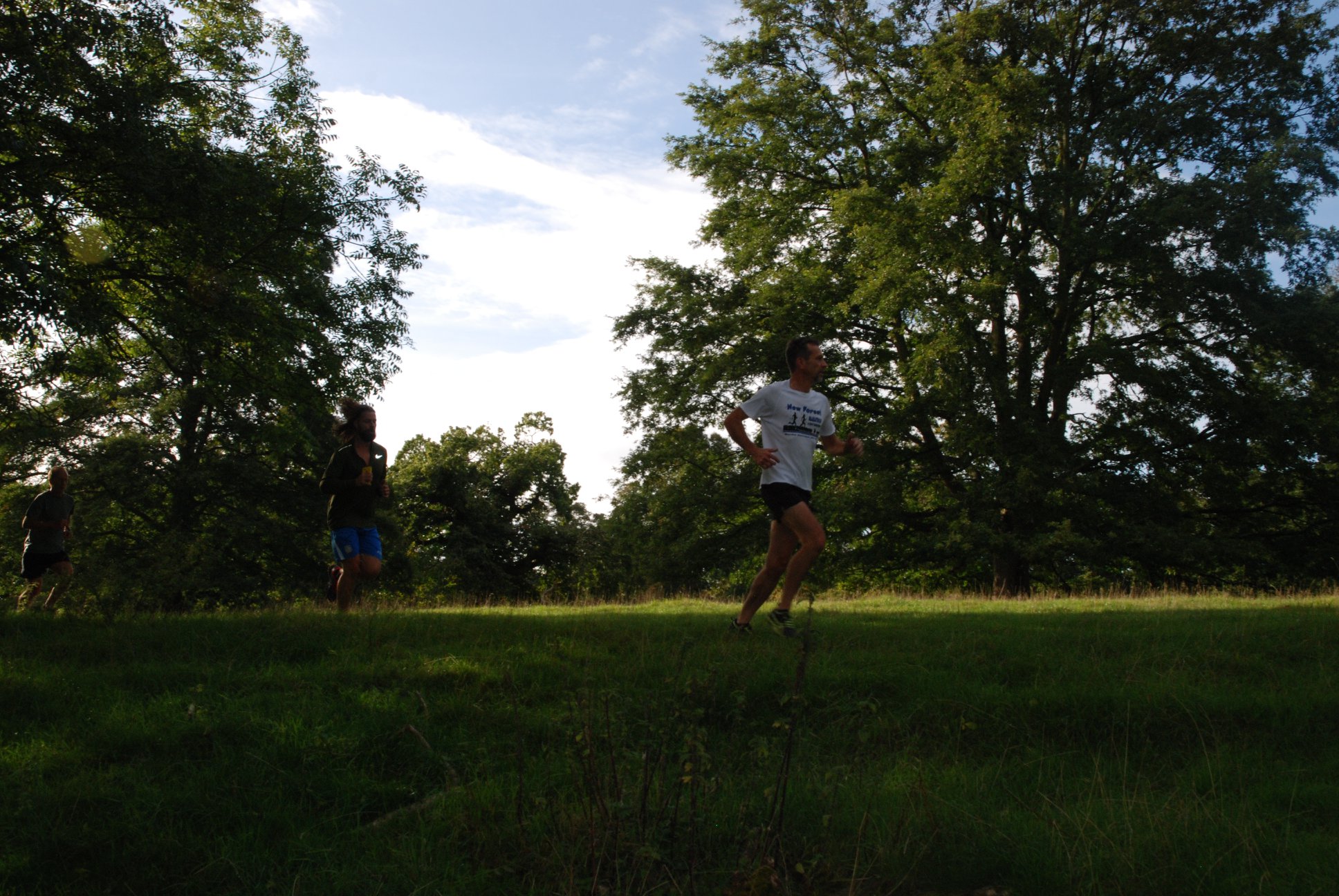 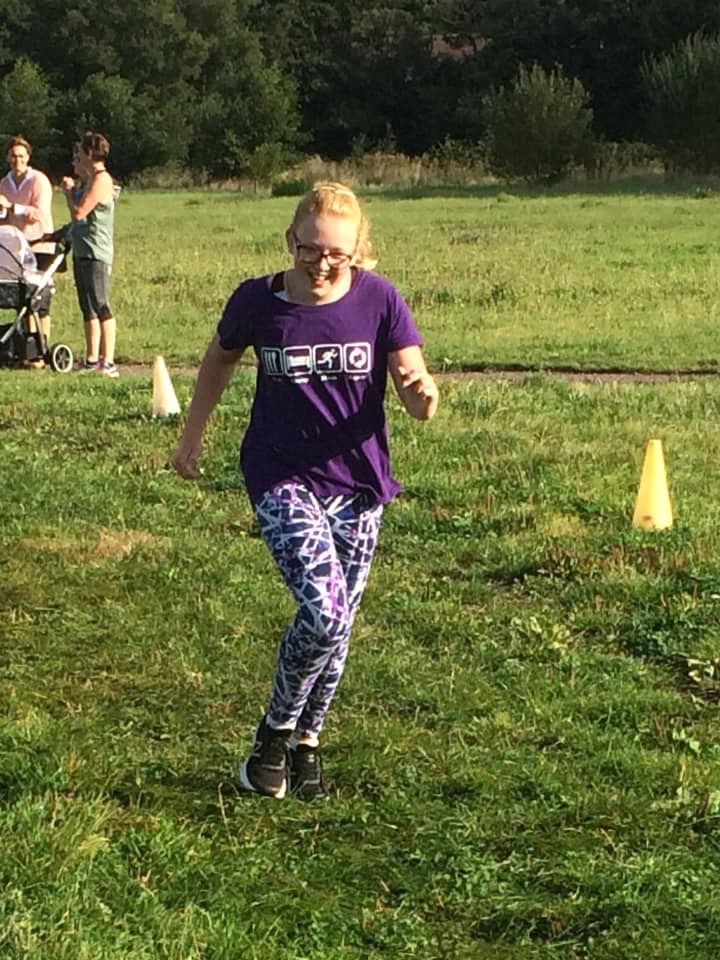