Parkrun numbers were down this week. We'll call it the 'Kipchoge' effect.

On Saturday morning, Kenyan Eliud Kipchoge, with a huge team around him, including a total of 41 pacemakers, achieved the
incredible milestone of running a marathon under two hours; almost 20 seconds under. Kipchoge ran a consistent pace set by an
electric timing car and the pacemakers of 2:50min per KM throughout the race with every single KM split being between 2:48min
per KM to 2:52min per KM. Think about those times next time you are setting your own pace!

This attempt clashed with UK Parkruns, starting at 7:15 UK time. The whole coverage made incredible viewing, and lead to an
unbelievable acceleration for the final 500m, when the pacer car drove away and the surrounding pacers parted to enable Eliud to
head for the line at an unbelievable adrenalin filled pace.

"I wanted to run under two hours and show human beings can do a good job and lead a good life. It shows the positivity
of sport. I want to make the sport an interesting sport whereby all the human beings can run and together we can make
this world a beautiful world.”

I would say he succeeded. However, he also succeeded in gluing me to the screen and making me the most inactive I have been on a
Saturday morning for some time! Sue tells me she also forefeited her usual Parkrun - but she was actively ironing while watching her
screen. Therefore, I wasn't surprised to see Langport Runners Parkrun numbers down as well as Parkrun as a whole down. Looking at the
stats, overall Parkrun attendance was down a significant 9.8%. However, I am sure Kipchoge's achievement will motivate me and many
people in their future runs. In fact, it did push me to run further than planned the next day. Also, amazing to read that this weekend, the
Ladies' Marathon Record was beaten by Brigid Kosgei at the Chicago Marathon. Brigid's time of 2:14:04 knocked more than a minute off
Paula Radcliffe's record, held since 2003.

The weather may well have also had an effect on turn out. Shepton Mallet was cancelled Friday evening due to flooding on the course
and there was still plenty of rain around on Saturday moring. Montacute were forced to shut their over flow car park due to it being
water logged and they also had to make changes on the course to protect some of the sodden tracks. Jean and Marie were our only
representatives this week and appear at the top of this week's table. Also running at Monty, was a chap called Imran Ali. Imran's home
PR is Coventry; and he is on a mission to run all of the UK courses. So far he run at visited 66 different venues, most of these he has run
just once. Yeovil was his choice this week.

There were the three usuals (Dave G, Cathy + Paul P) plus a Mike at Longrun; only Richard at Street; and Maggie travelled the furthest to
Burnham, where she was helping her friend Georgina celebrate her 100th Parkrun. 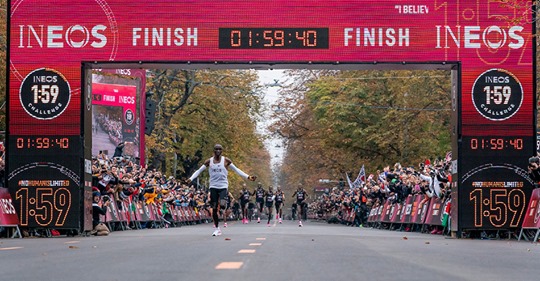 (2) The formation of Eliud's pacemakers. Helping to 'draft' and protect him from the elements and during his sub 2 hour marathon attempt: 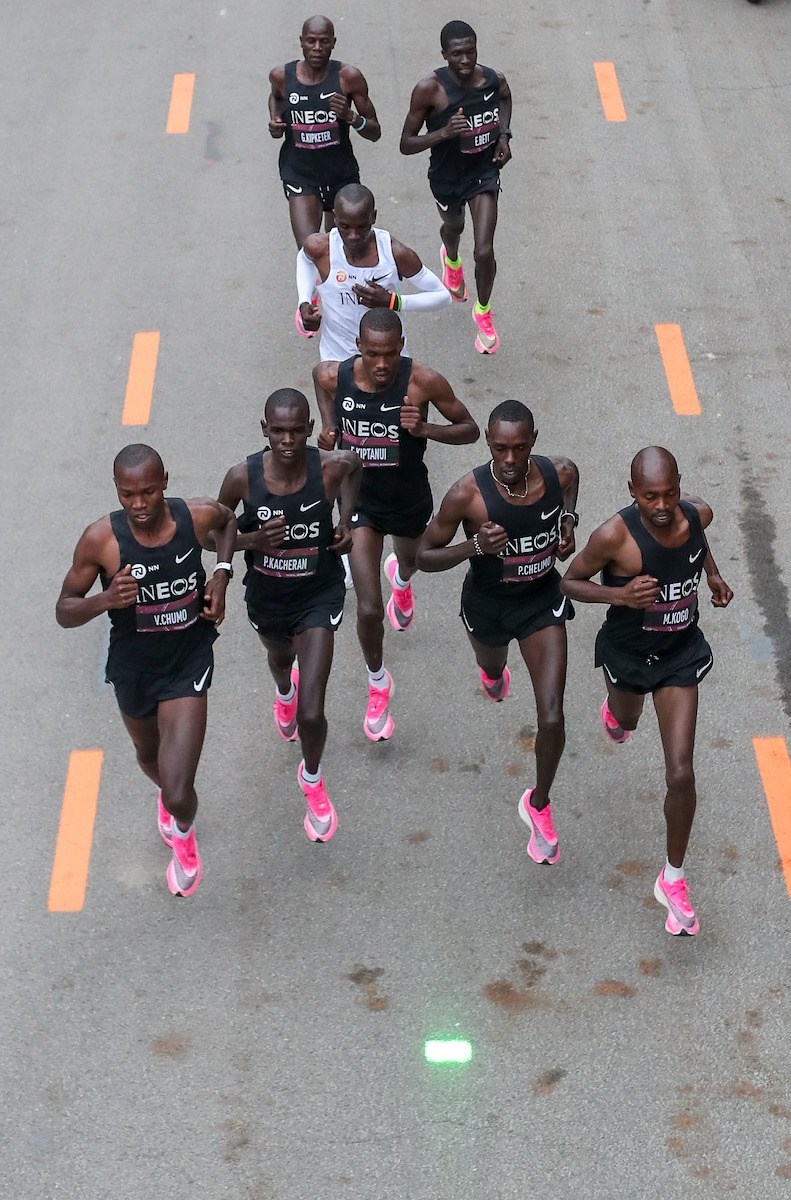 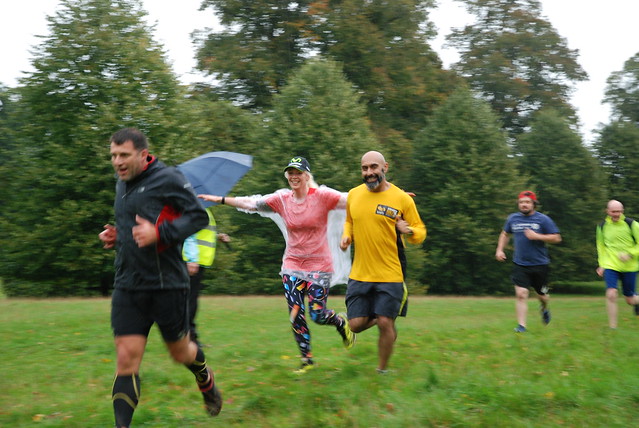 (4) Marie heading towards the very damp finish funnel at Monty: 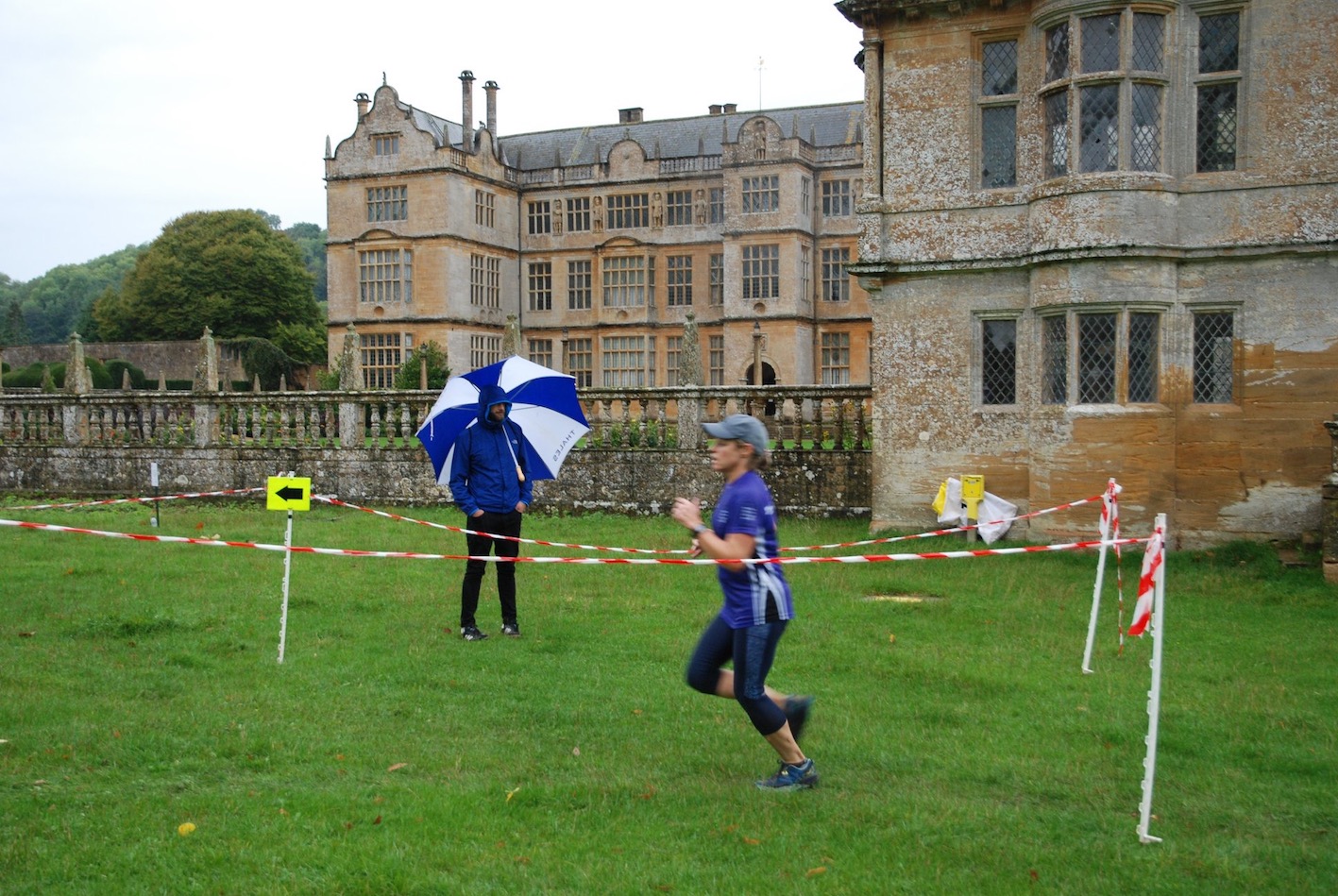 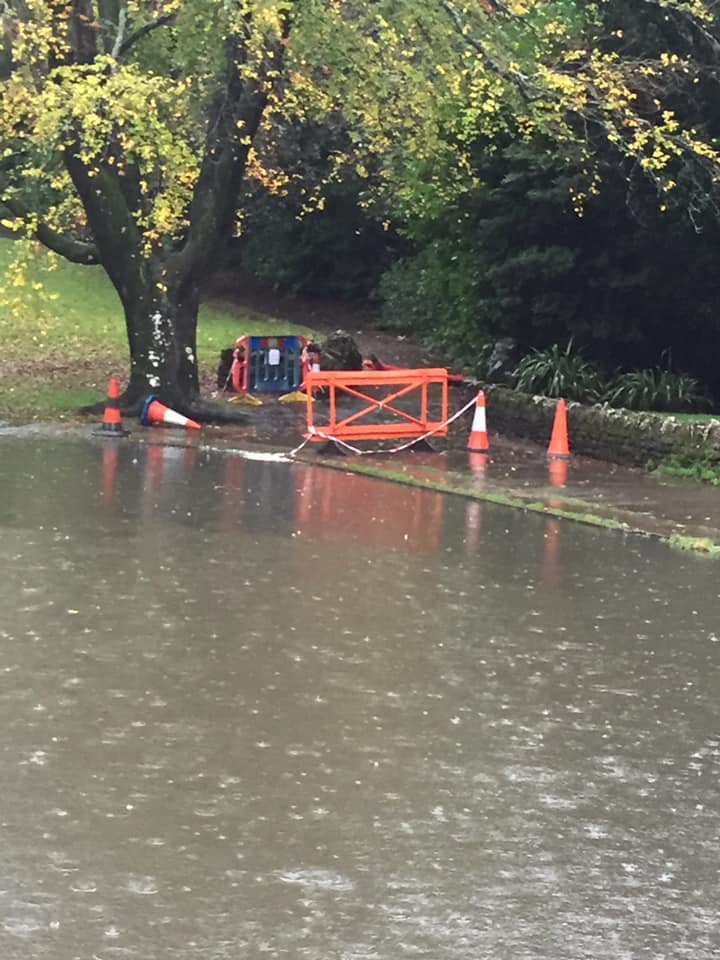